Clementine Brown is a young girl who wanted to play nurse more than anything. Knowing this, her parents gave her a nurse’s outfit and a first-aid kit for her birthday. They also played along and agreed to be her patient and follow her instructions.  As far as Clementine was concerned she was a real nurse. “’You can call me Nurse Clementine from now on!’” she announced. She took care of every person, animal and thing she could find. Her only disappointment was when she ran out of patients. “’Nurses need someone to take care of,’ Clementine said with a sigh.” Then, there was “a real emergency” that called her to duty. Her brother Tommy’s accident required Clementine to do her best bandaging ever and to firmly insist that Tommy keep her giant bandage on for a “full week.” Luckily for Nurse Clementine, Tommy, being her best patient of all, was delighted with his very special bandage was more than willing to keep it on for as long as possible.

Dr. Mom:  Many, many children’s gifts involve pretend play – especially the ones that kids themselves come up with as their favorite or most wanted gift. NURSE CLEMENTINE reminds us how important pretending is in the life of children.

Pretending was one of my favorite types of play with my kids. The most fun was when Dancing Bear visited. Do you remember Dancing Bear? From the Captain Kangaroo children’s TV show? Mom and Dad couldn’t see Dancing Bear; only my daughter could. But, when he was visiting, you had to watch where you sat because you just might sit right on top of him. Then, you had to deal with the “no-no” how-could-you cry of horror. She couldn’t understand why on earth you would just ignore Dancing Bear and sit right on him.

Darling Daughter: He was a 6-foot tall bear – how could you not notice him sitting at the dinner table??!?  🙂

Ezzy never had an imaginary friend that I know of, but I can’t count how many helpings of cotton candy, salmon, and blueberry juice I’ve been served (with a smile) while visiting “Ezzy’s Eatery” where she was waitress, short order cook, and cashier all rolled into one.

Pretend play also allows children to make decisions about how they should act. Will they be powerful? Will they be a follower? What will they do when they’re disappointed? When they are excited?

Despite Ezzy’s lack of full-blown imaginary friends, she did/does carryon quite elaborate multi-person conversations in which she plays all the parts.  I must admit it was a tad bit disconcerting to walk past the playroom and hear a heated debate from multiple perspectives (including an adult) coming out of her mouth.  When she is not carrying out her elaborate discussion/debates on her own, Ezzy seems to be drawn to imaginary play with her Barbie, Monster High, or My Little Pony dolls.  I am enjoying the break from my multi-course rainbow-flavored meals at Ezzy’s Eatery.

Pretend allows them to try out different ways to get and keep friends as well as to try out adult jobs they want to explore and know more about – like Clementine tried out being a nurse. You have to wonder whether Clementine will become a nurse or doctor when she grows up.  I think the author should write a sequel, so we can know that answer. 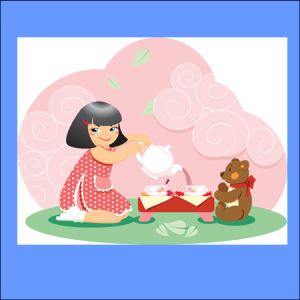 Pretend play is at a peak during preschool years. Although some parents look forward to children outgrowing that stage, the job of the child during these years is not to “grow out” of the stage, but rather to learn to enjoy it and understand it so they can keep it alive forever. This means that even as children become better and better pretenders, they need to also learn to tell the difference between what is real and what is pretend. Even when a person has a wonderful imagination, that person can and needs to know what things are real and what things are pretend.

Adults can help with this. Does it mean that adults can’t play along and pretend with the child? No, there’s nothing better than having adults become part of the pretend play. But, adults can let the child know when they are pretending and when they are not. For example, you can say, “I would love to play pretend with you.” You can say, “I’m done pretending now.” You can say, “We’re not playing pretend right now, so all the chairs here are for real people. Dancing Bear can have whatever chair he wants the next time we play pretend.”

BTW – Dancing Bear really just got up and stood behind my chair while we ate dinner. Then, he sat down again while the table was being cleared.  🙂

I never knew that. I guess I was the only one that had stopped pretending.

Encouraging pretend play and still keeping it real is pushed to the limit in almost every household when the monster under the bed appears. This is a great time for adults to teach what is pretend and what is real.

Boy oh boy did we spend a night chasing monsters at our house!

Chasing the monsters out of the bedroom, spraying magic potions, or casting a spell on them tells the child that you believe the monsters are real – just as the child fears. It says you think you need to protect the child from a real monster. Why else would you be slaying the monster? On the other hand, firmly saying that monsters are only pretend and can’t really be in your house or under a bed helps the child understand that there is a difference between pretend and real. It clearly says that monsters are only pretend not real and therefore not needing to be slayed, poisoned, or thrown out the window.

However, what children are feeling about monsters is real and they need to know you believe that they are afraid. The monster under the bed is about fear, so the way to be helpful to a child is to work on the fear instead of working on getting rid of the monster in some pretend sort of way. What would help your child overcome or outsmart the fear of the monster (Fear is Not All Bad)?

Ooops!  I didn’t know what to do, and my automatic reaction was to get hooked right into Ezzy’s “real” monsters. She was about 3½. We had just moved across three states back to my hometown; Dad was gone on a sea tour; and E. had just started pre-school. This was a recipe for disaster – way too much change for one 3-year-old!

One night E. practically had a panic attack at bedtime.  We made it through all our usual routines, including story time on Mom’s lap, but when it was time to go to sleep in her crib – whoa Nelly! E. had a fit.

We started off like that picturebook where the baby rabbit was trying to go to sleep but kept telling his mom there were monsters outside or downstairs. Mom would reassure him that it was a branch on the window or his father walking around downstairs – all while folding the laundry!

I kept responding to Ezzy’s complaints with grown-up explanations, but this was not what her 3-year-old brain could deal with at this point.  I was tired – oh was I tired. I needed E. to go to bed so I could go to bed. (Being a newly single parent was hard on both of us.)  In desperation, I asked E. what she thought would make the monsters go away.

I wrote a note for the bedroom door. I can’t believe I wrote a note to imaginary monsters to STAY OUT! As far as the windows go, I had to stand at them and banish the monsters.  I can remember standing there warning, “I’m the mom and I say that all monsters need to go away.  This is Ezzy’s room and you may not come in.”

Two hours past bedtime, E. finally fell asleep, and I went and found some chocolate to eat.  The next night guess what happened again? The same fit. I told E. that everything I did before still counted; I don’t have to do it again.

Then, she changed her fear of the monster to fear of noises she could hear outside. (I could not hear them, but she apparently could.) This time I tried a CD player playing “Baby Loves Bach.”  To this day, E. listens to music to go to sleep – something she will have to tackle eventually, but for now it works.  She is able to go to sleepovers and not take her music, so, I’m hopeful I haven’t ruined her for life.

I’m sure every reader can tell a story like yours. I wouldn’t worry about the music. You stumbled onto a way to outsmart her fear. She can use that clever way to not feel afraid for the rest of her life, if she wants to.

What kids want to be when they grow up

Have you ever thought that preschoolers were using pretend play to explore their future career? Watching their play today could give you a clue as to what their future work will be – at least one part of their future work. All those dress up clothes and all that pretend play, who knows what it can lead to. Like I said before, you have to wonder if Clementine will become a nurse or doctor when she grows up.

The world of work has changed amazingly over the last 30 years. Future workers may have as many as half a dozen different careers in their lifetime. So, that famous question, “What do you want to be when you grow up?” is not really the best question nowadays.  Even if their answer ended up being their first job, it will not likely be their only job.

Children need to start early to think of careers in terms of many possibilities, not just one. I suggest you start asking your children, “What are three things you want to do when you grow up?” It will encourage them to think they have lots of things they can do in the future. How exciting is that?  If they want to be both a ballerina and a firefighter – they can.

E. has a list.  She is going to be a mermaid, a cupcake baker, (We watch “Cupcake Wars” constantly.) a swimming teacher, and a clothes designer.  I never have had the heart to tell her she can’t be a mermaid. They say we can’t even imagine all the jobs of the future. Who knows, maybe there will be a mermaid career of some sort in 2035. E. does put a bunch of “or’s” in her list (mermaid or baker or teacher, etc.). I need to start challenging her by asking, “Why can’t you do them all?”

Yes, how many things have you been – so far?

Our parenting tips for the next two weeks are going to be about interesting ways to think about holiday gifts for kids. I hope they will inspire you to be creative about some very different kinds of gifts for your children. (Gift ideas)

HOW MUCH IS ENOUGH? Jean Illsley Clarke, Connie Dawson, and David Bredehoft